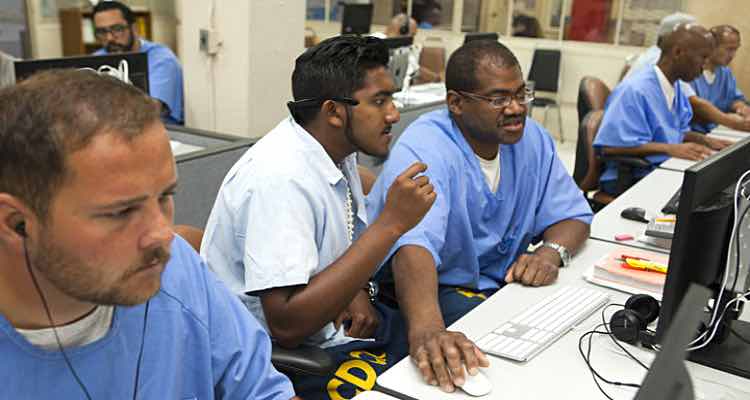 Delores Green and Hector Hernandez were talking in their office as usual, except that the mood was upbeat and happy. The latest recidivism data was in and the numbers were down again. Fewer repeat offenders than ever. The warden had come by to congratulate them, telling them that his boss at the State Corrections Office was raving about the numbers. This is why they came behind the walls every day – at last, they were doing some good!

It hadn’t always been like this. Delores and Hector would retreat to their little, windowless office at the end of the day to lament the latest lockdown which shut down their literacy program. The men spent more time staring at the ceiling than they ever did preparing for the real world. How could anyone expect them to make it on the outside?

The key had been to reposition themselves as a transition program instead of an education program. Re-entry was inevitable for their students who only averaged 14 months in the facility. Education might be a privilege, but preparing for the real world was a necessity.

The way they did it was special too. Instead of classes in job skills that everybody slept through, they had gotten creative. They wrote a grant to buy special tablets that connected to a VPN, a virtual private network that only supported the tablets. The tablets only contained a special family learning software program that taught the most basic reading and writing skills, but those were the skills that the men needed! Hector had written a report years ago: only 20% of the men in the HSE prep course could read at a middle school level, much less high school. No wonder so few got their certificates!

But, the best part of the software was the parallel program for kids. Once the men realized that their kids could see their progress in the reports, they started to model good behavior! They took responsibility for showing their kids that they could learn. And they did! So did their kids according to the software reports.

Now, every inmate gets their tablet during their orientation, and almost all of them take the devices with them on their way out the door. The data shows that their utilization drops once they get jobs, but lots of their kids are still learning. Who would have thought that a transition program could have so much of an impact on entire families?

An estimated 70 percent of the juvenile justice population suffer from learning disabilities, and 33 percent read below the fourth grade level. Over half of adult inmates in America’s prisons cannot read above a fourth-grade level. After completing their sentences, how are these people going to capture and maintain a job at a living wage and avoid recycling back into crime and prison? By learning to read! A 2013 RAND Corporation study showed that participation in prison education, including both academic and vocational programming, was associated with an over 40 percent reduction in recidivism—saving $4 to $5 for each dollar spent.

In 1992, the Texas Criminal Justice Council published Reading to Reduce Recidivism, concluding that computer-assisted instruction was effective in improving reading skills for prisoners, potentially reducing recidivism. However, as shown by a 1997-8 trial of reading software use to improve prisoner reading skills in Suffolk County, Massachusetts, if the prison staff use education services removal as punishment for misbehavior, few prisoners if any will spend enough time on task to benefit. And, as shown in Sumpter County, FL, if education programs start at too high a level, prisoners will not benefit. Prisoners reading at or below the 6th grade level may need to start working on 2nd or 3rd grade level texts in order to benefit.