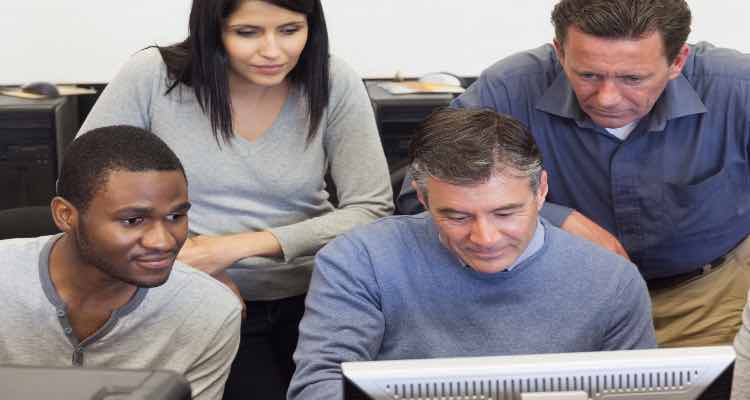 Gregor Abromovitch looked around the room with pride. Eight women and six men sat in folding chairs in the middle waiting for their moment. Another twenty or so partners, children and even parents sat around them and looked on with special interest. Fourteen people were about to start their new lives with well-paying jobs next Monday morning and the people who had learned with them were ready to celebrate.

Two years ago, Gregor would have expected to see three or four graduates sitting in their new business suits, but he knew at the time that three times as many had dropped out, and that wasn’t OK. The problem was that he didn’t know what to do about it. Now he did: he had to teach them to read and write.

According to Gallup and the Barbara Bush Foundation for Family Literacy, 54% of American adults can’t read 6th grade level material. By the time you measure the population signing up for workforce development programs, that’s probably 75% of students who can’t read the content that Gregor teaches. What do they do? They quit.

So, even though he hadn’t caused the problem, Gregor did something about it. Partnering with the Family Learning Company, he launched a pilot to see if combining reading and writing skill development software with job skills training would work. Perhaps most important, he encouraged his students to share the software with members of their families who could use to improve their reading too. Depending on their stages in life and family backgrounds, that turned out to be their children, their spouses and partners, and even their parents. The family accounts quickly filled up and Gregor’s center reports showed slow but steady growth in utilization. Most interesting, the only three students who dropped out were the ones with no family members sharing the software with them. Family involvement seemed to drive program retention.

It took about two months for Gregor to see the impact of the software in his classroom. At first, students struggled with the course as usual, and he could tell in Q&A that most of them only watched the videos, if that. But after the software had been in use for a while, they started asking questions based on some of the readings. That seemed to catalyze others to look, and soon entire classes were taken up by discussions about written lessons. Gregor felt like he had flipped the classroom. Instead of lecturing, he was leading interesting discussions – so much more fun – and the students were learning what they needed.

It got even better when it came to job interviews. Students actually did research on the potential employers. The read their web sites. They took notes. They were prepared when they went in to interview. And, they got their jobs.

As he waited for the ceremony to start, Gregor was thinking about the next step: job retention. Would improved reading and writing skills cut down the rate of job loss during the first six months? It should….

Family learning software is designed to develop the complete suite of job skills. Instead of using item response algorithms to constantly tell individual learners what to do, the program invites them to work together, and to talk together to use data to decide what to do; just as they will at work. Learners carry out sequences of tasks that build their executive function skills along with their literacy skills.

Family learning software motivates adult learners to persevere to fluency by linking them with their children and other family members. Most adult learners simply don’t stick with adult basic education programs long enough to gain relevant skills, but adults in family learning programs do. Given enough time, almost everybody can learn to read and write well enough to handle a 21st century job

Most workforce development programs assume adequate literacy skills to understand the content in text, build knowledge and prepare job-related skills. However, only 1/3 of Americans read above an eighth grade level, and most of the remaining 2/3 have skills gaps down to the second or third grade level. How to fill in those skill gaps while simultaneously developing job-related skills? Meet workers where they are with literacy development activities that carry them to specific job-related skills.